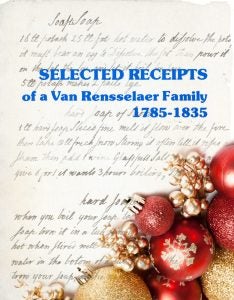 Every season prior to the break we publish a blog post to send you all off with some Rensselaer holiday history cheer. This year, we’ve honed in on the Van Rensselaer family recipe booklet published by Historic Cherry Hill, entitled Selected Receipts [Recipes] of a Van Rensselaer Family 1785-1835. One recipe that really spoke to me was Bread and Butter Pudding!

This is one of my favorite desserts, but I never really knew that much about it's history aside from being notoriously known as a British poor man's dessert. Seeing the recipe in this Dutch family's history prompted me to do a little research and try my hand at baking Elizabeth Van Rensselaer's (1799-1835) version.

First, did you know that bread pudding dates back to the Egyptian era and was called Om Ali? Though bread pudding has roots all over the world, each version comprises three essential ingredients, bread (old, stale, or home made), milk or heavy cream,  and eggs.  When baked the result is a thick, creamy, bread soaked delight!

Bread pudding has come a very long way since the Egyptian era. You wouldn’t believe the varieties of bread puddings out there. Go to Pinterest and search "bread pudding recipes" and you can spend hours sifting through recipes that include coconut cream, rum, gingerbread, blueberries, caramel, or bananas…even cookie dough. You can find savory bread pudding recipes with bacon, cheese, sausage, zucchini, or mushrooms! You can slow cook it, or not, you can make your own bread or use stale old bread, you can use a carton of eggs or that tapioca egg substitute, or make your own custard.  You can bake it, freeze it, thaw it, eat it and freeze it again…but I don’t know why you would.

So far this year I’ve made three bread puddings: Chocolate chip cranberry bread pudding, and vegan and non-vegan pumpkin spiced bread pudding. FYI – the vegan version I find difficult and not quite as satisfying, but honestly I attribute this to my own lack of patience and desire for milk and eggs. I've even tried my hand at gluten free but this did not end well. The signature flavor profiles of bread and butter pudding are eggs and rich cream, hard to obtain with substitutes.

Nevertheless, imagine my surprise when at Dr. Jackson's Campus Wide Holiday Celebration last Friday, my colleague came back from the dessert bar with a plate of bread pudding! I'll note here that she was very reluctant to share and told me I had to get my own - can't say I blame her...it was that good! Anyway, finding the Van Rensselaer recipe filled me with glee and I couldn't wait to give it a try!

Van Rensselaer Family Bread and Butter Pudding: Slice bread thin, spread thick with butter lay it in a dish with currants between each layer small bits of citron and lemon pour over a rich raw custard 3 hours before baking.

Rich Custard: Boil 1 pint of milk with lemon peel & cinnamon, mix 1 pint of cream & the yolks of 6 eggs well beaten, sweeten the milk when it tastes of the seasoning, pour it into the cream stirring well then give the custard a simmer till of proper thickness, stir it one way only. Do not let it boil.

In making this recipe I couldn't help but be  mindful of several facts. If I were making this in 1800 at the Van Rensselaer Cherry Hill Manor, the bread would have been made from scratch, one of the cows in the back pasture would have been milked for the cream and butter, and the eggs retrieved from the chicken coop. How I would have sweetened my milk, that’s tough to say; honey, molasses or maple syrup are obvious choices since sugar wasn’t easy to come by, but for a wealthy family like the Van Rensselaers, it may have been possible.  I would have had easy access to currants since they were widely grown in the U.S. and Canada at that time. The lemon and citron 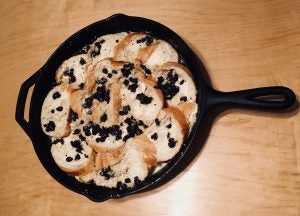 seems more a sign of wealth for 1800. Nevertheless, I would have used an iron skillet, a wood fired cooking stove or open hearth, and while I was making this bread and butter pudding, eight other tasks or chores would have been happening at the same time! After all, this was a 900 acre manor to run and maintain. My version consists of store bought and packaged ingredients (and I'm not entirely sure where they were trucked in from) and a gas range, but at least I could honor the use of an iron skillet!

So this holiday season, I encourage you to make some bread (and butter) pudding. Trust me, you won't let anyone down. If you decide to make the Van Rensselaer recipe, please let us know about it!

Until next year, Happy Holidays!

Jen shared this concoction with the library staff today. It was great! I recommend a little whipped cream or vanilla ice cream to top it off. Just don't think about the calories... :)

I just love this post! Both nostalgic and delicious--right up my alley! Thanks for sharing, Jen!

I agree, do not pay attention to the calories!