The construction of the Panama Canal begins with the French. In 1875, while the United States was conducting surveys across Mexico and Nicaragua, trying to find the right canal route, France became very active and ambitious, eager to make their mark. The French spirit had been so greatly aroused by Ferdinand de Lesseps’s completion of the Suez Canal in 1869, that France decided to take the lead and attempt to conquer the Isthmus of Panama. Again, RPI Engineers were involved, in varying capacities. 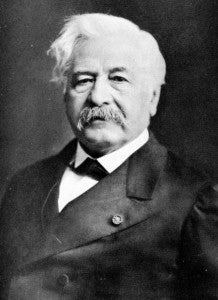 Ferdinand de Lesseps was a French diplomat. During his early career he was posted to Tunisia and Egypt. In 1854 Said Pasha of Egypt gave de Lesseps permission to build the Suez Canal. De Lesseps's scheme was backed by an international commission of engineers with financial support from the French emperor Napoleon III and others. The Suez Canal opened in November 1869.

The Geographical Society of Paris organized a committee in 1876 entitled Congres International d’Etudes du Canal Interoceanic seeking international cooperation for the purpose of building an inter-oceanic canal through Panama. Having gained fame for his Suez endeavors, de Lesseps desired to repeat his success in Panama. Being a national hero, he was asked to lead the Congres and make a canal in Panama come to fruition. 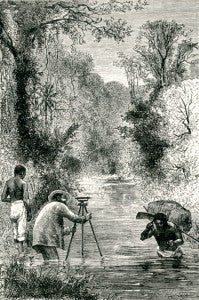 The French felt that further exploration and more surveys needed to be conducted. French Navy Lieutenant Lucien N. B. Wyse was assigned by the French government to explore possible routes on the Isthmus. When Wyse arrived on the isthmus, the Colombian government assigned Pedro Sosa (RPI 1873) to the expedition as scout engineer and chief of technical control and topography. In the second survey expedition, Sosa traveled alone through the jungle. The difficulty of this exploration won 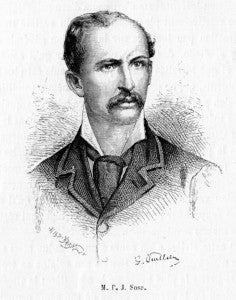 him the admiration and respect of his comrades. When the expeditions were finished, the Congres agreed on a route that followed the path of the Panama Railroad, one that went straight through the continental divide, still with the conviction that a sea-level waterway was possible. The Congres met in Paris on May 15, 1879, agreeing to name the route the “Wyse-Reclus-Sosa Line”, in honor of the engineers who had mapped it. Sosa was awarded the French Legion of Honor for his work.

Few individuals on the Congres were actually engineers; the majority were diplomats. One notable engineer, Aniceto García Menocal (RPI 1862), who had always advocated for a Nicaraguan canal constructed by the United States, stood up against de Lesseps’s sea-level waterway scheme, stating how impracticable the project would be. Menocal made a brave, bold stand against the French hero, who enthralled his audience with exuberant confidence and infectious enthusiasm over conquering the terrain of Central America. De Lesseps convinced everyone (at least those who were not engineers) that a sea-level canal was possible, and work began on January 1, 1881. 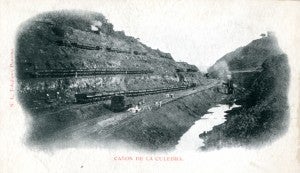 In addition to Menocal and Sosa, we know of two more RPI engineers involved in the construction of the canal at this point in history. Though scant information exists, Auguste Henri Albert Millet (RPI 1867) was Chief of Technical Bureau, from February 1882 to October 1882, and then Chief of Section at Culebra (the mountain zone) from October 1882 to May 1883. John Henry Curtis (RPI 1873) also began working for the French in September 1883. According to our resources he was appointed as contractor for “the removal of Bohio Mountain” in the Panama Canal Zone. 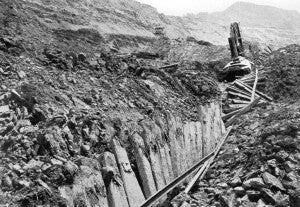 Sadly, however, what our engineers would have seen and were exposed to is hard to imagine. Never enough of the right type of equipment for mountain terrain; a massive death toll in human lives due to yellow fever which came in two- or three-year cycles; malaria too continued to take even more lives than yellow fever.  Ultimately, poor planning doomed the French to utter failure. No one understood yellow fever and malaria, and worker housing was sub-par at best. Arrogant determination to cut a sea-level waterway through the continent persisted, leading to the reckless purchase of supplies compounded by corruption and scandal. 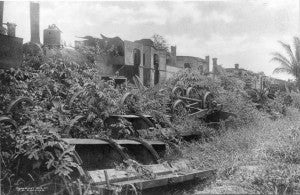 All work on the canal ceased in 1889, and the French company in charge went bankrupt. $262,000,000 had been expended by the French, with little to show. Overall the French excavated about 22,600,000 cubic yards through the Culebra Mountains. This was the point of deepest excavation. Nevertheless the vast quantity the French excavated wasn’t even close to the amount of wet and dry earth that needed to be removed.* Ferdinand de Lesseps was indicted for fraud and sentenced to 5 years in prison although the sentence was never carried out and he died two years later, his reputation forever marred by the Panama Canal fiasco. The French debacle cast such a dark cloud over the idea of a canal 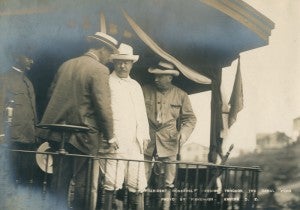 in Panama that no one was interested in revisiting the idea again until 1901. When President McKinley was assassinated, Theodore Roosevelt took office and almost immediately declared the need for a canal. Roosevelt strong-armed Colombia into submission in order to carry out what President Grant envisioned 32 years prior as "an American canal under American control." Stay tuned for the next post which reveals even more RPI engineers, their legacy, and the completion of the Panama Canal.

*To place the cubic yardage in perspective, by the time the Americans were finished excavating, 188,280,312 cubic yards of earth were removed from the canal zone.

Interesting. Particularly in light of the PBS Burns/David McCullough's recent series on the Roosevelts and his highlights concerning Teddy Roosevelt's "strongarming" during the struggle for the rights to the land around the Panama Canal.

Yes, certainly. I haven't seen the Roosevelt series yet - you may also like the following PBS documentary which provides a very detailed view of the ways in which Roosevelt approached Colombia : http://www.pbs.org/wgbh/americanexperience/films/panama/

I am not sure.
I have: born in Sherman, Conn in 1811, died/buried in Panama (malaria or yellow fever)
married to Mary J. Gordon.
other interesting fact is that his mother's maiden name was Nichols - not sure if there is a relation to A.B. Nichols.

Jen,
Thanks for this article - very informative....well done.

I am looking for additional information regarding a Nicholas Conger, an American engineer who went to Panama as part of the French effort/debacle...and died in Panama.

Any ideas of where to look would be greatly appreciated.

Larry, Thank for commenting. Do you know if Nicholas Conger was associated with Rensselaer Polytechnic Institute? Thanks