The cane, a fashion accessory popular in the nineteenth and early twentieth centuries, was also a college status symbol.  Canes or walking sticks were once commonly "worn" by men during this time period.  At many colleges, freshmen had to earn the right to carry a cane on campus.  Cane rushes or cane contests involved a game of sport or wit between the freshmen and sophomores to win this right.  If the RPI freshmen lost, they could not carry canes until Washington's birthday.  Check out this web page to learn more about the contest at RPI:  Cane Rush. 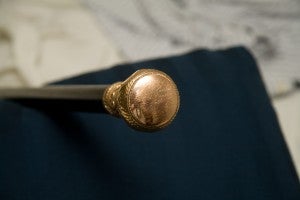 Canes were commonly given as symbolic awards or gifts.  The outgoing Grand Marshal received a cane as a gift for his service.  An RPI alum owns a handsome Grand Marshal cane -- pictured on the right.

The names of the founders and early members of Theta Xi were carved into a cane, which was displayed at the Alpha house for many years.  Canes used at the cane rush were carved with the year of the winning class.  They were stored at the Chi Phi house.  If anyone knows where these canes are today, I would LOVE to know! 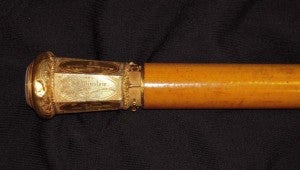 In the Archives, there is a cane that was given to John F. Winslow by the employees of the Albany Iron Works upon his retirement from the company in 1867.   A cane made from the wood of  the Merrimack

or the U.S.S. Virgina was created by Messrs. Tilley and Co. after the timbers were recovered in 1876.  It's ironic that we have a cane with origins at the Albany Iron Works where parts of the Monitor were manufactured and a cane from the Merrimack, it's counterpart.

Canes or walking sticks are highly collectible.  If you have a cane with a connection to RPI, please leave a comment and tell us about it!

Hi! I happen to also have a cane made from the wood of the Merrimack! It has, or should I say had, a bone handle in the shape of a ram's head. It has a silver ingravement and all but the handle is still fine.

Nice. Love your post!!! I am just loving this wooden walking stick. Thanks for sharing.