The '87 Gymnasium opened its doors in 1912 and thus began an new era in athletics and physical education at Rensselaer (I'll write more about this in a future blog post).  The new gym required a new custodian to take care of it and so Emil H. Page was hired to do the job.

Emil Page, or "Pagie" as he was affectionately known, was not just any custodian.  He didn't just mop the floors, clean the toilets, empty the garbage and change the light bulbs.  No, he did much more than that.  He often worked a 12 hour day that included storage and distribution of athletic gear, answering the phones to give out game scores, administering first aid (he was the first unofficial athletic trainer), offering advice and encouragement to players, and providing players and spectators with anything they needed from "a safety pin on up."  He was known as the "short man with a huge smile."

Pagie could remember the names of countless students and recount the accomplishments of successful athletes over several decades.  Alumni would flock to see him during reunions on campus.  The Class of 1916 made him an honorary member -- they came in 1912, too.  Phalanx inducted him as an honorary member (only the third person to receive this distinction) in 1951.  During the tap ceremony, Pagie was described as being "as much a part of athletic life at RPI as the 87 Gym itself." 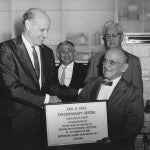 When an addition was made to the Gym in 1937, a two-story janitor's apartment was included in the plans.  This was apparently Pagie's base of operations, but he had a wife and five children at home in East Greenbush.  Two of Pagie's children graduated from RPI.  Alfred was in the Class of 1929 and Harold in the Class of 1933.

Pagie retired in January 1959 after 46 years of service at RPI.  He was 77 years old.  Now that's dedication!  In 1960, a physiotherapy room in the '87 Gym was dedicated in his honor and named the Emil H. Page Physiotherapy Center.  Pagie died just a few months later.

Among the items that Pagie sold from the counter of his cage that cought my eye was the "Olympic Champion Athletic Supporter". When I first spotted the product on display, Pagie told me that he grew up in "the mud flats of Cohoes", and was friends from childhood with the man who manufactured that product. That is why no other brand was sold there. The manufacturer was my own Uncle Francis Montmarquet. Pagie told me that they called him "Mont-mar-shit".

Great story!! Thanks for sharing it!

While there, we went to the '87 Gym and, there, Pagie was working behind the cage dispensing towels to the students, giving advice, repairing injuries to the students wounds, etc.

Now this was about 25 years after my dad had graduated. Pagie saw him and immediately said "Ben, Ben, it is great to see you again after so many years." Pagie then went thru an amazing biography of my dad's days at Rensselaer. "He was Captain of the track team and Captain of the cross country team. Thou he was only 5'2" tall, he won every race in which he was entered. This included the Penn relays."

My dad was a modest guy and had told me relatively little of his running exploits. But, Pagie recalled everything. We then walked to the front of the gym and he showed us pictures of Ben's teams. Before we left, he insisted on giving me a lacrosse ball. I have the fondest memories of that visit, although it was over 60 years ago.

Phil, thanks for sharing this memory!