It’s no secret that the Grand Marshal is symbolized by a top hat – the GM even writes a column by that title in the Polytechnic. But other symbols of the office are less well known, such as the cane presented to 19th century GMs at the end of their terms (see amythearchivist’s post, “a walking status symbol,” July 28, 2009).

I recently learned of a very different symbol of the highest student office at RPI through an unexpected source – ebay.

We have a standing search for all things RPI in ebay, and I check the results daily. There’s usually a mix of RPI clothing, old postcards, Math & Science medals, out of date Institute publications, etc. Online auctions have helped us fill several gaps in our collections, and it’s kind of a fun way to spend a few minutes of my day. Occasionally I find something really different, as I did a few weeks ago.

On March 19th a gold and enamel bar pin showed up among the new ebay lots. With the letters “GM” between “R.P.I.” and “1884” it certainly looked authentic, but the clincher was the inscription on the back: “William A. Aycrigg.” Not only did William serve as GM in 1884, but he also kept scrapbooks documenting his activities as a student. Three of them, containing programs, calling cards, newspaper clippings, and other memorabilia, are in the Institute Archives (MC 45). The volumes have been painstakingly indexed, so it was easy to identify pages that might shed light on the pin. 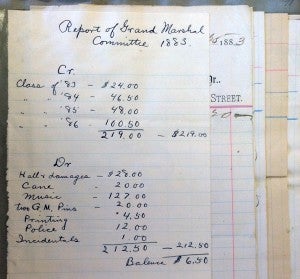 Voilà! An 1883 Grand Marshal Committee financial report includes a receipt listing a variety of expenses, including $20.00 for two GM pins. It’s not clear why two were ordered, but at $10.00 each they were quite costly for the time. 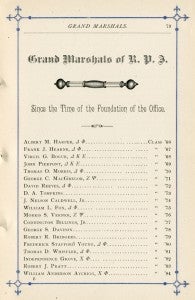 At this point I knew I wanted the pin for our artifact collection, and I placed a bid. While waiting for the auction to end I dug into a few more sources. The Polytechnic wasn’t published in 1883 or 1884, but the June 1885 and 1886 issues both mention presenting newly elected GMs with a pin. And while I can’t prove when this tradition started (or ended), the shape of the pin hints at a fairly early adoption. The Transit usually included a list of former Grand Marshals, and as early as 1874 the GM page included an engraving that matches the shape of the pin! Since the engraving only appears on GM pages it’s clear that form was a symbol of the office of the Grand Marshal for many years.

My last, and most edifying, discovery was a photo of William as a student. I didn’t immediately notice the pin on the vest of his suit, but there it was – next to his Chi Phi fraternity pin! Clearly these would have been two of the most significant emblems of his associations as an RPI student. I’m happy to report that my bid was successful and the Archives now owns this interesting piece of Rensselaer history… just in time for GM Week 2015! 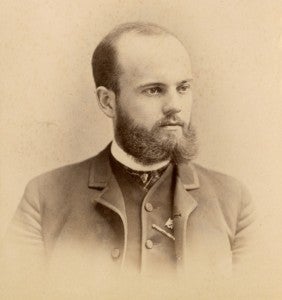 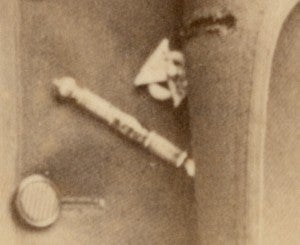 Wow, a picture of him wearing the pin! Awesome!

How neat! I'm wondering...did you contact the eBay seller to learn the back-story on how they acquired the pin? It'd be interesting to dig a little deeper, if possible.

Great question! I did follow up with the seller, but unfortunately she had no information on the pin's provenance. I was hoping she'd have more items related to Aycrigg, but I struck out there as well. But at least the seller is on the lookout now.

BTW, this pin came to us from Colorado. It's a bit of a mystery how this piece of Rensselaer history made its way out west, but there are some things even an archivist can't dig up!