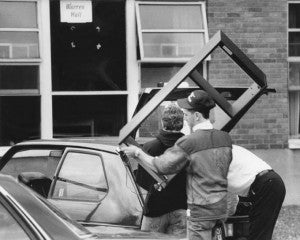 Getting students to college usually involves parents with cars packed to capacity.  The cars line up in front of residence halls and multiple trips are made to haul in the accouterments that make a dorm room comfy.  The admissions process and student orientation sessions are in the past; room assignments, meal plans and registration for classes are taken care of.  After the unpacking and final farewells, first year students are launched into Navigating Rensselaer and Beyond programs -- some fun stuff before the real work begins.

Flash back about 150 years and the scene was quite different.  The parents said good-bye at the front door or the stage coach stop or the train station.  The students packed a carpet bag and a trunk (or maybe two) with clothing and personal necessities.  They traveled alone and often used several modes of transportation to reach their destination. 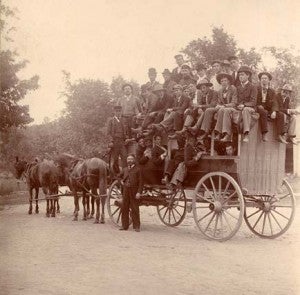 Ambrose Powell, class of 1868, traveled from Laurens, NY.  In his diary he noted that he took the stage coach to Cooperstown and stayed over to visit friends.  He then "took the stage for Fort Plain, arrived there at 4 in the afternoon, took the [train] cars from there for Troy at 8:30, arrived in Troy at midnight." 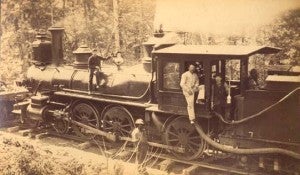 I took the cars for Gerham 12 miles from Canandaigua and then the stage for Geneva (9 miles) where I arrived at 9:00 p.m.  I here took the Central R.R. for Albany and rode all night sleeping and waking by turns.  I reached Albany at 3 a.m. on Saturday - my trunks went direct to Troy." [written in a letter to Lucian Bird, Oct. 8, 1954] 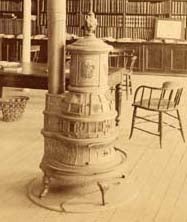 When they arrived in Troy, the students had to find their own accommodations at boarding houses around the city.  Arthur Bower, class of 1871, "went and found Mr. Gager that I might get the address of Miss Malinda Gager who I thought might be pleased to assist me in getting me a boarding place, but Mr. Gager very kindly took it upon himself to aid me and found me a place at No. 17 Grand Div. St.  The room is a back room, though of good size and well enough furnished with the exception of a stove which I shall have to get, as I furnish my own fire and light." [1867 diary]

Their first order of business at the Institute was to be examined for admission.  Candidates were examined in arithmetic, geography, English grammar, and algebra.  If they passed the entrance exams, they could register for classes.  Charles Martin remarked that "there are lots and lots of students compared to the whole number who came here who fail to 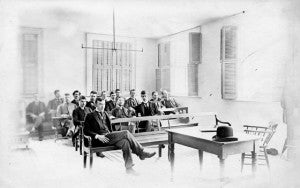 enter."  They were allowed some conditions, which in most cases had to be cleared before the end of the term.  Martin was allowed to postpone the algebra exam so that he could review the material.  Arthur Bower failed spelling - "I had passed all right on everything but spelling upon which I was conditioned as was everyone else of whom I know anything about."  He goes on to remark that the test was unfair and consisted of 150 very difficult words.  Some students continued to retake the spelling exam into their senior year.  Engineering students who couldn't spell -- go figure!

Love this entry, Amy! Great use of both photos and manuscript material. Looks like you put a lot of work into it.

Wow. Compared to today's Navigating Rensselaer and Beyond program, moving in 150 years ago makes my move here look like a piece of cake!