This Week in May

Finals week is coming to an end, and from my vantage point (limited as it may be), it has been very quiet on campus this week. It definitely feels like the semester is winding down. On the job, I often live in the past ;) and today I wondered how very different it must have been here 38 years ago this week in May.

I recently worked on a collection of papers from the 1970s and was amazed at the documentation of student protest activity in 1970. On Monday, May 4th, 1970, four students were killed at Kent State. On May 5th, a spontaneous demonstration took place on the '86 Field at RPI. The Student Council voted to support a strike of classes on that day —  this was part of a National Student Strike. Following a rally in the Field House on the evening of May 6th, as many as 60 students broke into the Student Affairs Center (now the Admissions Office) and began a sit-in that lasted over 39 hours. The students issued the following demands:

1. President Folsom issues a press release to the news media taking a public stand on the war in Indo-China and repression of political dissent in America. 2. President Folsom implements a change in the current status of ROTC on the RPI campus; the minimum satisfactory change is the immediate removal of academic credit for all ROTC courses. Furthermore we wish that there be no penalty for non-attendance of classes and that tests currently scheduled be on a voluntary basis.. Finally we insist that all occupants be granted amnesty and in no way penalized. 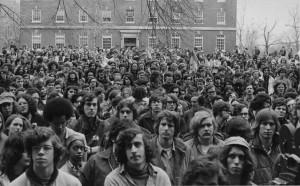 The Faculty Council met on May 7th and 8th to discuss ROTC at RPI. They also voted to support a pass-fail resolution. Students were given the option to withdraw from the their classes and take a P or a V (basically an incomplete) instead of earning a regular letter grade. A campus referendum to abolish ROTC was defeated by a majority of students and faculty. President Folsom addressed the campus community at the Field House on May 8th. He stated that the Kent State shootings and U.S. military involvement in Cambodia "have been too much for students to take. They are reacting from a feeling of frustration. While they are showing their disapproval in a very unorganized way, they feel that they have got to do something."

Students also called for a boycott of commencement or an alternative commencement to protest the commencement speaker Lee Alvin DuBridge, President Nixon's science adviser. Dr. George Wald was invited by students as an alternate speaker. Ultimately, protests against commencement were called off. Dr. Wald spoke at the baccalaureate and Nick Williams from the Black Student Alliance spoke on behalf of the "students view" at commencement. The 1970 commencement was held on June 12, 1970.

Whew, what a week!