A Spoonful of Fun!

I recently posted about a souvenir spoon held by the Institute Archives and Special Collections department at RPI.  Well, it’s not the only one!  The first one was produced at the very beginning of a spoon collecting craze in the gay nineties (1890s, that is).  The other one in our collection dates from 1914.

This spoon is different from its predecessor in many ways.  First and foremost, this one features an engraving of the Carnegie Building inside the bowl, while the earlier spoon represented RPI with a transit level on the handle.  The newer one is also customized with engravings on the front and back of the handle.  The front bears the letters “A.E.G.” while “Xmas 1914” is on the reverse.

I had hoped to identify A.E.G., but I can find nothing to connect this handsome artifact to a specific person.  Lack of provenance – the chain of ownership of an item or collection – is one of the down sides of acquiring materials through vendors.  Objects like silver spoons are likely to have changed hands several times before they end up in the archives, limiting our ability to trace their origins.  Nevertheless I’m pleased to have not one but two RPI silver spoons in our collection! 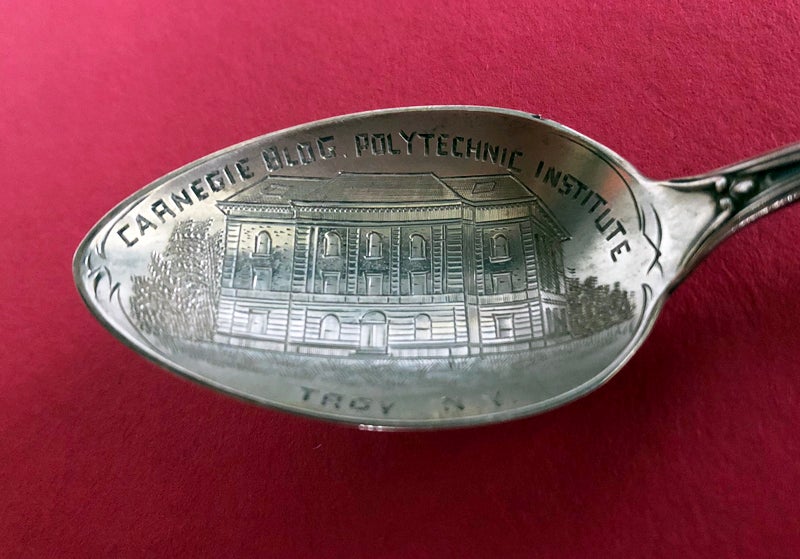 When I posted a photograph of an RPI spoon from the 1890s, I kind of hoped someone else would recognize the design and contact me.  As Ken Breitkreuz’s comment to that post indicates, he does in fact have a souvenir spoon similar to the one in the archives collection.  Ken (RPI Class of 1988) was kind enough to share a photograph of his spoon, which bears the same markings on the handle as the one held by the Institute Archives.

However, Ken’s spoon has one major difference from the one I wrote about.  His version has a traditional oval bowl instead of the scalloped shape of ours.

Thanks, Ken, for allowing me to share this image of an RPI relic with our readers!