Continuing Up the Hill: Campus Dormitory and the Rensselaer Student’s Association Clubhouse 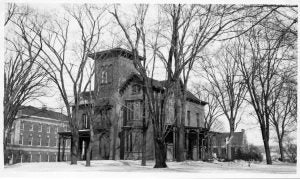 The Warren House, acquired with the 1905 purchase of the Warren estate property, was converted into a student dormitory in 1907 and remained the only campus housing until 1916. The house was officially named the Campus Dormitory by a resolution of the Board of Trustees in 1916. The Institute rented rooms to about thirty students. A caterer supplied meals and was paid directly by the students. The house was located in front of the present site of Lally Hall.

In 1935, after the construction of two new dormitories, the Board of Trustees decided to dismantle and remove the old Warren House. The only thing remaining of the building is the front door handle which is housed in the Institute Archives. 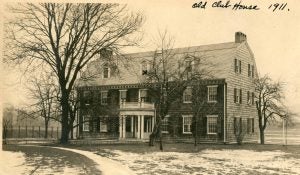 Rensselaer Student’s Association Clubhouse:  In 1906 a committee of Rensselaer graduates met in New York City for the purpose of organizing a Rensselaer Student’s Association. During the first decade of the 20th century the majority of the Institute’s 485 students resided off-campus in Troy rooming houses and the intention of the alumni was to create a club that served as a central on-campus meeting place for all students, where all would be welcome without regard to fraternity or other affiliation. To quote the December 12, 1906 edition of The Polytechnic: “The object of the association is to establish a true democracy in the student body, to develop loyalty to the Institute, and in every way to cultivate the Rensselaer spirit. In a word, to make college life a reality at Troy.” 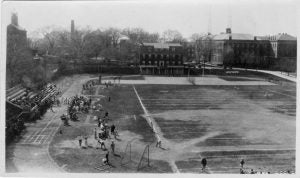 The committee of graduates began by raising money to pay the salary of a secretary of the association. They also attempted to collect money for a clubhouse, but only $3,600 was donated. In the meantime the Rensselaer trustees authorized $10,000 for the clubhouse which was completed in 1908 at a cost of $19,000, of which the Trustees ended up contributing $15,500. 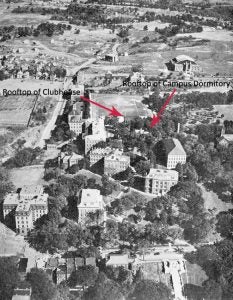 The following description of the new building appeared in the June 10, 1907 edition of The Polytechnic: “The students’ clubhouse of the Rensselaer Polytechnic Institute will be located on the east side of the campus, adjacent to the athletic field. It will be of the colonial style of architecture and seventy feet in length by thirty-five feet in breadth. The basement will contain the hot water boiler for shower baths, with room for lockers if necessary. The first floor will contain a locker room, shower baths, toilets, and office for the secretary and a billiard room. The second floor will have a dining room, kitchen and main lounging room. The lounging room will be about 50 by 35 feet in size, and by means of accordion doors the dining room may be thrown into connection with it so that an apartment seventy feet long will result. Student’s receptions and dances may be held in this room. The third floor contains sleeping rooms for the secretary of the association and servants.”

Situated at the west end of the ’86 athletic field, the club house served as the headquarters of all student extra-curriculum activities until it was razed in 1932 and replaced by a new Rensselaer Union building, the present day Lally Hall.