The first week of April 2017 marks the one hundredth anniversary of the United States entry into the Great War, or the First World War as it came to be called. On April 2, President Woodrow Wilson went before a joint session of Congress to request a declaration of war against Germany. Wilson cited Germany’s violation of its pledge to suspend unrestricted submarine warfare in the North Atlantic and the Mediterranean, as well as its attempts to entice Mexico into an alliance against the United States, as his reasons for declaring war. The U.S. Senate voted in support of the measure and the House concurred two days later. The United States later declared war on Germany’s ally Austria-Hungary on December 7. In May the Selective Service Act was passed requiring all males between the ages of 21 and 31 (later increased to 18 through 45) to register for potential call-up for military service (the draft). 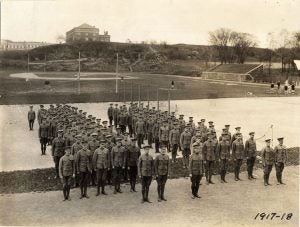 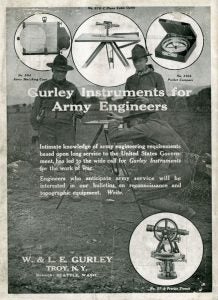 In 1918 the possible value of higher education in wartime was acknowledged by a new War Department rule that college and university students who were academically in the first third of their class would be granted draft deferments. This rule was criticized by former President Theodore Roosevelt for giving special treatment to students. Rensselaer’s President Palmer Ricketts responded to Roosevelt in a letter to the editor of the Baltimore Sun arguing the case for educational deferments.

President Palmer Ricketts described the program in a September 1918 letter to Rensselaer’s alumni. Both the army and navy units were demobilized after about 80 days in December 1918. Two hundred of the students immediately left the Institute and those remaining returned to their four-year curriculums. 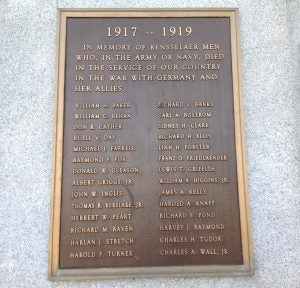