Whenever people return to Troy for reunion at least a few alumni visit the Institute Archives and Special Collections department.  It’s always fun to pull out materials and learn about their student experiences at the ‘tute.  This year an alum came in to do some research on a team he belonged to in the late 1940s and early 1950s.  While printing some pages of the Polytechnic for him I discovered what he already knew – RPI had a phenomenal cross country team 65+ years ago!

Before I share the story of that team, I’d like to introduce one of its central figures.  Tony Diamond, RPI Class of 1951, and his wife Irene stopped by with one of our regular researchers, Stephen Tzikas, Class of 1983.  After a brief discussion Tony asked to browse the Poly, and that’s when I realized what a star athlete he was.  Or rather, is – Tony is still competing and recently won several races in the National Games!

Back to RPI’s cross country team.  In the 1940s the Institute had both freshman and varsity squads.  Tony’s 1947 frosh team went undefeated, and Coach William Eddy had high expectations for the varsity program when the freshmen runners moved up in 1948.  However, the varsity team lost its first meet that year when frontrunner Diamond went off course.  It would be the first and last time Rensselaer’s varsity harriers would lose for the next three seasons. 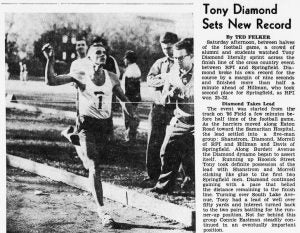 As in any sport, it’s great to have individual stars, and Tony and his teammate Elwood Frymire were both standouts.  However, in team sports depth is even more critical to success, and as Tony puts it, his role as a captain was to help develop the underclassmen.  That focus clearly aided the team as it raced to victory in 18 consecutive meets.  A piece in the November 9, 1949 Polytechnic said it all.  RPI’s harriers were “THE team of the fall season” while the school’s football team foundered.  The following year the harriers went on to win the first annual New York State Intercollegiate Cross Country Championship in Cortland on November 18, 1950. 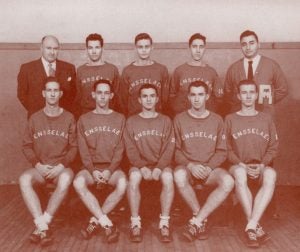 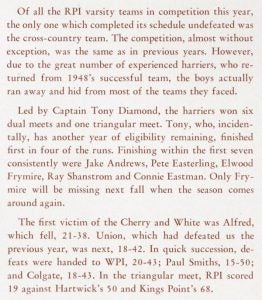 I enjoyed learning about the cross country team’s accomplishments and I owe both Steve and Tony a debt of gratitude.  Steve for promoting the archives to other alumni and Tony for calling attention to a nearly forgotten piece of RPI history, now revealed.  Thanks guys – I hope to see you both next year!