In our efforts to bridge the gap between the past and present, we share with the Class of 2015 a look back 100 years to Wednesday, June 16, 1915, when Rensselaer Polytechnic Institute graduated 87 men, one of the largest classes on record at that time for the Institute.

A grand affair, the 85th Commencement took place in the ‘87 Gym. Hiram F. Mills ’56, a renowned Hydraulic Engineer was the commencement speaker. Mills was connected with many important water supply and sanitation projects. The commencement program included the William Tell overture by Gioacchino Rossini, Conferring of Candidates and Degrees, the singing of "Old Rensselaer," Benediction given by Rev. Dacey, and a finale of "Alla La Polacca De La" Serenade.

In keeping with tradition at the time, the students and alumni held a pageant which formed at The Approach with the present GM, John W. Howard and former GM Glenn W. Tisdale, along with several others. All were mounted on horseback and led the procession in white trousers and red sashes. Nollers Band followed, and then came the New York Alumni after which several earlier classes followed in automobiles and "grotesque costumes." Several floats were included to highlight clubs and shenanigans. For example, the Scholarship Club, the Social Outcasts, and "the toads" were among the many. Upon arrival to campus up the hill, 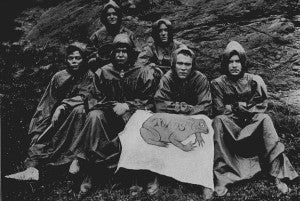 the procession was met with a circus and mock bear hunt by students of the Rifle Club. Then, a pushball game ensued between the classes of ’05 and ’07. At the conclusion of the pageant, President Palmer C. Ricketts awarded "the silver loving cup" to the class who made the best appearance. He chose the Class of 1917, who endearingly called themselves "Ricketts’ Convicts."

A shining star among the Class of 1915 requires mention here. Emil Praeger from Brooklyn, NY, born in 1882, entered the Institute and gained recognition as the "tall and handsome athlete." His classmates describe "all fair hearts in Troy were in a flutter" when "Praeg" entered the "Tute." Praeger’s professional legacy was so significant that he is now in the RPI Alumni Hall of Fame. Among his many accomplishments, he is remembered for designing the Tappan Zee Bridge which spans the Hudson River at Tarrytown, NY. In WWII, Praeger went to Washington as design manager of the Navy’s Bureau of Yards and Docks and was commissioned a Commander and later Captain.

With this we bid the Class of 2015 a fond farewell, we wish you the best success, and we hope your legacy makes it into the Archives as well!

Great post! Especially loved the pageant photos, which show incredible school spirit and camaraderie on the part of both students and alumni. The class of 1907 commentary would have been equally relevant in the economic/political climate of 2008. Some things go in cycles...
The photos also suggest a strong connection between the Institute and the City that had diminished when I attended in the 1980's. Thanks!