As many of you know, the main publication on the RPI campus is the Rensselaer Polytechnic.  But did you know why the Polytechnic was revived in 1885, after being out of publication for nearly fifteen years? I stumbled across the answer to this question while completing my first project as an intern here at RPI, digitizing nineteenth century student newspapers.

In 1856 the first RPI student newspaper, the 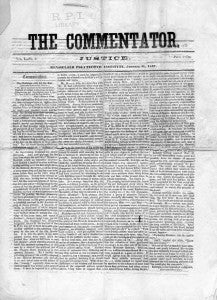 The Commentator was then succeeded by the Surveyor and the Rod and Leveller during the mid-1860s.  They too did not last long.  Both appeared to have lasted throughout the 1865-1866 academic year before publication ceased.  Interestingly, it seemed as though the two were rivals.  A month after the Surveyor was introduced the Rod and Leveller published a critique of the new paper, calling it “fine by defect, and delicately weak.”

The Rod and Leveller and the Surveyor were followed by the earlier version of the Polytechnic.  According to its masthead, the Polytechnic was a “record and review of civil, mechanical, and mining engineering and general college news.”  Although the student newspaper was deemed a success by local and national newspapers, it was unable to last past 1869 (Polytechnic, December 18, 1869).

Fifteen years later, five students contemplated publishing a quarterly scientific newspaper.  In February of 1884, they sent out a letter seeking subscribers and contributors to help make the proposed newspaper a success.  The Rensselaer Polytechnic Institute Quarterly was published three months later in May.  The Quarterly’s publication came with great difficulty, “owing to the failure of the alumni to respond to calls for contributions” (Quarterly, 1884).  The editors were unable to tell readers when the next issue would appear, but hoped that it would appear in November.

Unfortunately that issue would never be produced, and the RPI campus was without a student newspaper. The failure of the Quarterly did have one positive side effect though.  Due to the lack of a “medium for the regular exposition of matters of interest to [the Institute], its alumni and the public,” a group of students decided to revive the Polytechnic.  Unlike its predecessors, including its earlier version, the Polytechnic was able to last more than a few issues!  Luckily, issues of these early student newspapers survived and can be accessed through Rensselaer Digital Collections.