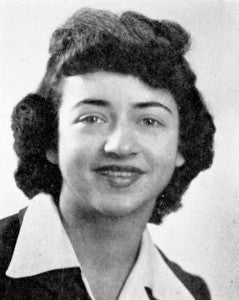 “I remember my first chemistry professor…he was in the front of the class of course, and he said, ‘This reminds me of classes I had’--and he mentions where he was at the time--because that was co-ed. Here I am right in the middle of the first row with about…sixty fellows.”

On November 23, 2013 and again on January 6, 2014, Archives staff captured the sound portrait of Mary Ellen Rathbun Kolb, RPI Class of 1946. Mary graduated on April 22, 1945 with a degree in Metallurgical Engineering. She entered the Institute with one other female, Lois Graham, in September 1942. Mary and Lois were the first female graduates, after 116 years of RPI being an all-male college. What changed? RPI felt the pressure of World War II looming. 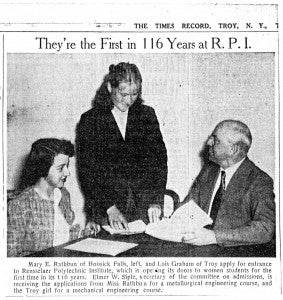 On September 12, 1942, Livingston W. Houston, Secretary and Treasurer of the Institute, stated in a press release, “In view of the rapidly increasing need to train women to replace men in the war effort, Rensselaer Polytechnic Institute will admit a limited number of qualified women students to its degree-giving courses. They will be accepted for entrance during the week of September 14.” So much had changed on campus, practically overnight. Only a few months prior to Houston’s announcement, the Board of Trustees had dismissed the option to admit women.

We first met Mary for lunch and to introduce ourselves in August 2013. We talked casually and asked her to tell us a few things about her days at RPI.  She shared a few typical college antics. For example, Mary explained how she played matchmaker for several young RPI men, getting them dates with Russell Sage ladies! We also caught glimpses of some fun-filled times with the Sigma Phi Epsilon (Sig Ep) fraternity house (where she met her husband Edward Paul Kolb ’44, president of Sig Ep at the time). In sharp contrast to this sort of fun however, Mary frequently recalled the atmosphere of war.  In fact, during the first interview Mary stated “you have to remember there was still a war going on. It wasn’t your normal student relationship with the surroundings that you have now. The guy next to you was liable to be in the army tomorrow and liable to be dead the next day. I mean it was a very different atmosphere.” Several different times throughout our interviews she conveyed similar sentiments regarding wartime on campus. 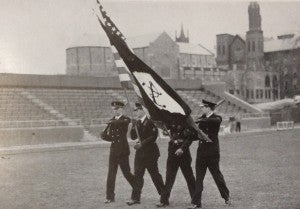 We were taken with Mary's memories of wartime. That first meeting with her guided the background research we conducted prior to the formal interviews. We focused on RPI’s campus environment from 1940-1946 and quickly discovered that engineering schools across the country were in high demand for the war effort, and the U.S. Government offered funding for campus alterations and accommodations of military programs. RPI was one of those colleges that "went military, or rather naval, in quick order" (Education for a Technological Society, Samuel Rezneck 346). In September 1941 the Naval Reserve Officer’s Training Corps was 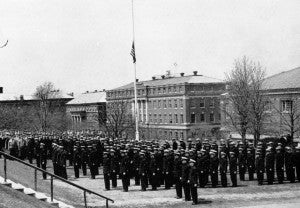 established at RPI, and soon afterward, the V-5, a Navy Flight Preparatory School for enlisted men was created. In July 1943 a regular training program for naval officer candidates was introduced called V-12. Despite a predominant Naval presence on this campus, Mary's memories reflected classmates being drafted or disappearing into a variety of different war programs and branches of the military. For the duration of time that Mary attended RPI, war was the overarching theme. In fact, the Class of 1943 stated in their yearbook that they are a “war class” using the phrase The Fighting Engineers to describe themselves.

Fun was not completely eliminated during the war years, even though as Mary pointed out, “We were trying to get through school as fast as you could. Get out and maybe do something for the war effort…You had to keep up with your studies…You didn’t have time for a lot of extra stuff.” Nevertheless, dances at the Sig Ep fraternity or the '87 Gym were still a prominent aspect of student life. Mary shared one incident where she was trying to push a Sig Ep brother up the stairs at Sage, “..the place where the girls were.” According to Mary this young man hadn’t dated before and they were eager to get “him going.” Another fun glimpse into Mary’s life, particularly at school but a lifelong pleasure, is playing cards. During the interview, Mary’s son prompted her to comment on playing cards with her professors. Mary said, “I always play cards whenever I have a chance.” The interviewer asked, “Did you beat them?” Mary replied, “Of course.” 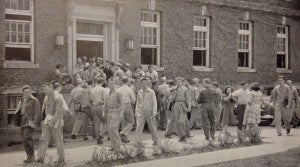 What was it like to be here then, with all those young men? The interviewers expected Mary to explain separate female policies, curfews, lodging assistance, perhaps even a female adviser. Rather she stated “I don’t remember RPI providing anything except an education which I certainly appreciated.” Mary explained that she lived at Russell Sage, and when they weren’t in session, she lived wherever she could.  At one point she lived in north Troy with her eye doctor’s secretary. She would take the bus each day which dropped her off at the foot of the Approach, where she “crawled up the Approach,” and continued going on to her classes. We also asked her if she “encountered many attitudes about women students?” Mary replied, “No, never. I’ve been asked that over the years and there was no animosity at all. A lot of liking…But we were all in the same boat…” 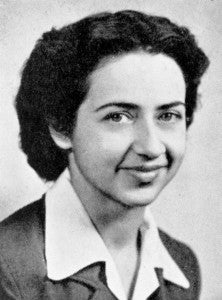 The Institute Archives has countless scrapbooks, diaries, and student notebooks from 1824 to the present documenting student life at Rensselaer, but virtually all of these collections belonged to male students, describing an all-male campus. Now we have a different perspective. Mary described this vignette: “There weren’t any women around really for a while. I remember we did get one woman instructor…I remember her distinctly. I was walking by the school one day and I looked up at the window and she was there waving at me—I said ‘oh my gosh that’s an instructor, what did I do?’”

It’s not easy to remember the past, especially when you’re asked to recall experiences from over 69 years ago. We are truly grateful for the opportunity to meet and interview Mary, and learn about this momentous time from a female perspective. March is Women’s History Month, a great time to announce the completion of this oral history interview with a woman who loved science and was one of RPI’s first female engineers.

What a wonderful article. I am very, very proud of my mother and all that she has become and given to everyone she meets. Thank you for capturing her so well.

Thank you Nancy, we had a wonderful time talking with your mom! I'm glad you're happy with this project. Best-Jen

I am not computer savvy but am I so glad I was able to
search this. Reading the oral interview of Mary Ellen Kolb is refreshing and brought back wonderful memories of my one-year stay with my foster family as an AFS exchange student in 1965-66 from the Philippines. I miss my Kolb family - Mom Mary, Dad Ed, my foster siblings - Mary Jane, Paul, John &amp; Nancy. Thank you so very much for featuring my Mom Mary. Maria Luisa "Bing" Ascalon

The thing about "The Fighting Engineers" struck me. Maybe that is where we got our team name from?