Even Further Back Down the Hill 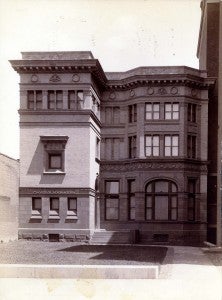 The construction of the Main Building in 1864 marked the beginning of the steady expansion of Rensselaer’s campus up the hill on Troy’s eastern edge. There were two exceptions: the Gymnasium (the subject of our December 3 post) built just below the Main Building in 1887 and the lesser known Alumni Building erected on Second Street next to the Troy Savings Bank in 1893.

Despite its name, the Alumni Building was not intended as a center for Rensselaer alumni activities, but rather as home for the Institute’s geological and mineralogical collections and its principal administrative offices. Rensselaer’s entire collection of geological and mineralogical specimens (many of which were collected by Amos Eaton) was destroyed in the Troy fire of 1862. Following the fire Professor of Natural History Henry B. Nason began assembling a teaching collection of minerals, rock specimens, and fossils which were housed on the top floor of the Main Building.

At an alumni meeting in January of 1888 in Troy, Professor Nason urged that the Institute erect a fireproof building in which the collections could be housed. The State Geologist of New York James Hall, Class of 1832, promised a valuable collection of fossils if such a building was constructed. 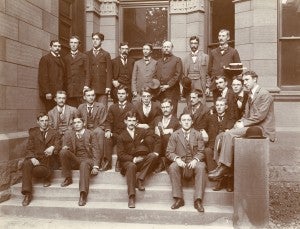 Part of the funding for the fireproof building was raised by subscriptions from participants in the Troy meeting and in January 1889 Pittsburg alumni pledged enough to cover construction costs. A lot on Second Street immediately north of the Troy Saving Bank (where the Rensselaer trustees held their meetings) was purchased in 1890 for $10,000 with funds subscribed by the trustees. The building was designed by the Wilson Brothers architectural firm of Philadelphia (all three brothers were alums).

Fifty feet square and three stories high, the building was faced with brownstone on the first floor and yellow brick and terra-cotta on the top floors. The first floor contained the Institute library, an office for the Institute’s director and a meeting room for the board of trustees. The top floors contained the geological and mineralogical collections (about 10,000 specimens) and a lecture room for the department of geology. The total construction cost was $35,000. 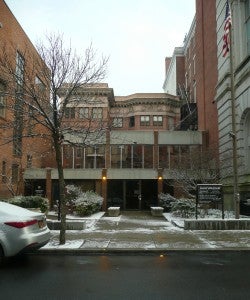 The Alumni Building was in use from 1893 to 1912 when all the collections and offices were moved to the newly constructed Pittsburg Building. Sold in 1915 to the Young Men’s Hebrew Association, the building is now owned by First Niagara Bank.

Palmer C. Ricketts, who occupied an office in the Alumni Building first as Institute Director and then President, summed up his exasperation with its location in his 1934 history of Rensselaer:

“No good reason has ever been given for the erection of the Alumni Building on Second Street, so far away from the other buildings and so far below them. Its use as the office of the director was extremely inconvenient. The library, while in it, was almost useless. The collections housed in it compelled its use for the teaching of geology and mineralogy, to the great inconvenience and loss of time of students all of whose other recitations were conducted in the buildings half a mile away from the Alumni Building and on the hill about 100 feet above it. When the Warren property was bought and buildings began to be erected still further up the hill and the number of students began to increase, the inconvenience became still greater…”