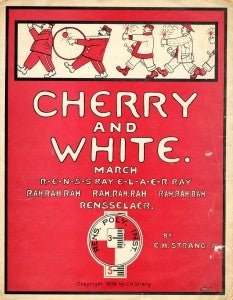 In 1947, Samuel Rezneck (Professor of History at the Institute) replied to a researcher who asked why the Institute had adopted cherry and white as its school colors. We have Rezneck's response to the query which reveals some colorful articles he found in The Rensselaer Polytechnic that I sought out for myself and couldn't resist sharing with our readers. The following excerpts from the articles do not officially explain why cherry and white were chosen, but they're fun descriptions which convey a growing sense of school spirit during the late nineteenth century.

The first reference to cherry was in 1887 when The Poly published an article analyzing the colors of other schools as a response to another college's publication simply listing schools and their colors. That analyses goes like this:

"Cherry...not so flaunting as the scarlet of Rutgers, less gruesome than the ruddygore of Harvard, a great improvement on the weak pink of Hamilton, vastly less confederate than the cardinal and grey of Stevens and the Boston Tech…”  In conclusion, Cherry was not to be “spoken of in the same day with the garnet of Union... There can be no doubt that cherry is a ripe color.”

Pride was certainly included in the above passage, but another article, equally as descriptive, points out objections to cherry being the only color adopted due to some drawbacks:

“...an ex-freshman procured a blazer of solid cherry but he was attacked by an infuriated bull… He then had to dye his blazer a different color."   Furthermore, “a player does not look well covering third base, with a uniform of block cherry. As for a football player... he much resembles a vulgar evil one, such as may be seen at any masquerade ball.” The editor therefore made a proposal: “Why not make it cherry and white?”

Rezneck found another article in The Poly on Dec. 20, 1890 regarding school colors. This time, the student union was considering the Institute color. Within this article a key concern was raised over the exact shade of cherry. Therefore, it was suggested that several shades be chosen, placed in the gymnasium, and compared, however we don't know the outcome of that comparison. 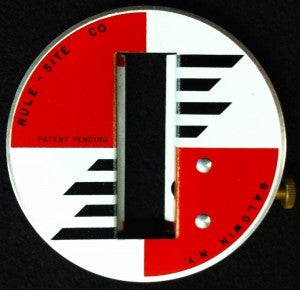 Rezneck's final discoveries of school colors were found in the June and October 1891 Poly. First, a committee was formed to design a button and retain the "old Institute color, cherry." Permission was given to add white to the button, but the Poly doesn't specify who gave permission. Finally, in October 1891, an Institute badge was created having cherry and white as the prominent colors, "Rensselear Polytechnic Institute" was written in gold, and the shape of the badge was the target of a leveling rod. We don't have the badge, but to the right is a target.

If you have any further information on the history of cherry and white as the school colors, please comment!