It's that time of the semester when students focus on intense study and face their final examinations.  Professors (and/or TAs) will then spend hours grading the exams and recording final grades.  In the early years of the Institute, final examinations were not evaluated by professors, but by a board of examiners.  The Board of Examiners was composed of several "literary, scientific and practical men" not associated with the Institute.  The examiners were appointed by Stephen Van Rensselaer himself for several years and then by the Board of Trustees.  A public examination of students was held at the close of each session and the results were published in the trustee minutes and a local newspaper.

"It is intended in all cases, and especially when students are candidates for degrees, that the examination shall be extended and critical, and include experiments and illustrations of the subjects, communicated in the form of brief lectures." [Catalog, 1847]

A standard grading system did not exist for many years and the terms used in the evaluation reports changed frequently.  The very first graduates were either "recommended" or "not recommended" without further comment.  In 1828, students were rated in each subject as below medium, medium, good or very good.  Medium was defined by one of the examiners as "compared with students in general who have passed through a similar course of exercises."  I think we would refer to this as average. 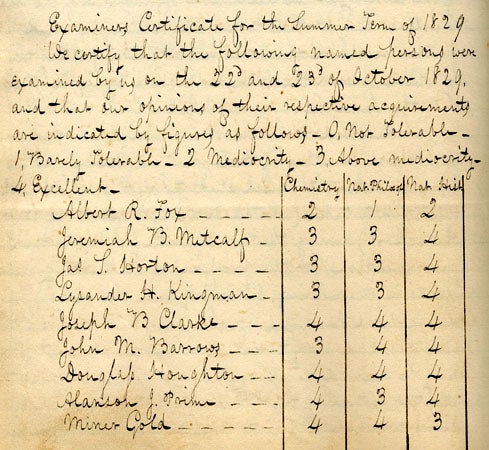 The ratings got a little funky in 1829: not tolerable, barely tolerable, mediocrity, above mediocrity, excellent.  Mediocrity and tolerable were not defined, but I'm guessing mom and dad were not proud of those grades!  The terms below medium, medium and super or above medium were used for several years until 1835 when they got really creative and added a couple of extra-fine ratings: 2nd sub-medium, sub-medium, medium, super medium, 2nd super medium. A numerical scale of 1 (below medium), 2 (medium) or 3 (above medium) was eventually implemented.

The appointed Board of Examiners was invited to sit with the Faculty of Instruction as a co-ordinate Board of Examination in 1854.  This was a transition year after the first class had completed the new three year curriculum.  In 1855, the examinations were held before an "Academic Board" made up of the full faculty.

"The Examinations shall be conducted in a manner to secure a searching scrutiny and impartial judgment of each Student's knowledge of the subjects studied by him during the session, full records of which shall be kept in a form adapted to permanent preservation." [Catalog, 1855]

As an archivist, I really appreciate their concern for "permanent preservation."  We have scholastic records that date back to 1857!

The examinations remained public through 1909, but were "partly written and partly oral," and took place over a period of eight days.  It is not clear whether the "public" nature of the exam continued to be an evaluation before an Academic Board.  It does appear that from 1910 forward, the examinations were supervised and evaluated by the professor of each class. 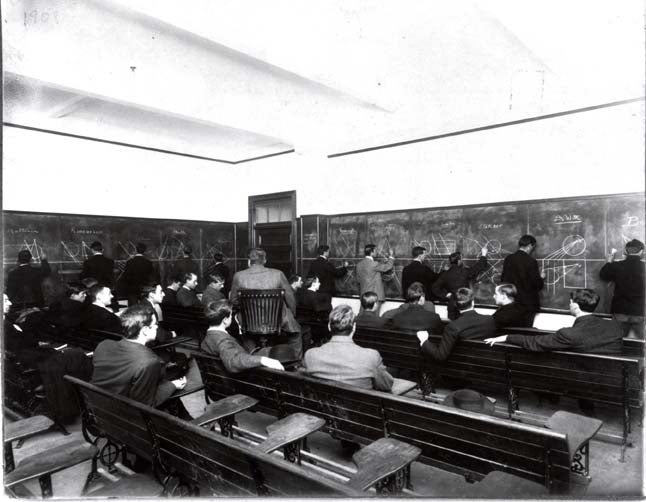 Daily records were kept by professors for each class utilizing a 0-4 grading scale.  Incredibly, the daily grades were often calculated to the hundredths of a point!  Students were graded on conduct and effort as well as their recitations and exams.  Professors were required to send weekly grade reports to the Director for his review.

Students received a grade report with either p for passed or d for deficient marked next to each course.  A 3 (75%) was a passing grade.  In subsequent years, marks for n - not examined, nse - not sufficiently examined, and pc - passed conditionally, were added.  This type of report card was in use until about 1930.  If a student was deficient in a course, he had the opportunity to be re-examined during the next term.  He had to pass all the courses in his division to move on to the next level.  All students began at Division C and progressed to Division B, then Division A.  When the course was extended to four years in 1861, they began at Division D.

Old methods or current methods, final examinations have always brought the semester to a close with a week of stress!  Any thoughts about finals in the past?  Leave a comment!