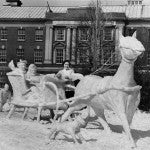 Mid-winter fesitivities with various names have come and gone over the years at Rensselaer. In 1949, the Junior class planned a Snowflake Saturnalia dance in lieu of the Junior Prom. The Rensselaer Outing Club (ROC) organized outdoor activities during the 24 hours leading up to Saturnalia and dubbed it "Winter Weekend." The schedule of events included:  skating on South Field (see the 1940 campus map for it's location); "amusing games" on ice; a snow sculpture contest; bobsled, snowshoe, and ski races.

It all sounds good, right? As the Winter Weekend drew near, the weather forecast looked, well, warm. ROC scrambled to come up with an alternative location for the wintry events and eventually announced that Jiminy Peak would be snowy enough. As it turned out, all the outdoor events were canceled.

ROC quickly whipped up a cocktail party at the Crooked Lake Inn as an alternative and fun was had by all. The Saturnalia dance, held in the '87 Gym later that day, was a huge success.

The 1950 Winter Weekend was blessed with lots of snow. The snow sculpture contest had plenty of great entries (we have pictures of many of them in our photograph collection) and an all-campus ski meet at Jiminy Peak was well attended. A Winter Weekend/Carnival and Saturnalia dance continued to be held annually through the 1960s.

In 1978, the Undergraduate Council brought back the Winter Carnival and it was held during a February weekend that provided plenty of snow for the festivities. The Saturnalia dance and snow sculpture contest were a hit just like old times. The UC planned a full weekend of events in 1979 adding kazoo night at a hockey game, a snow football tournament, broomball tournament and dogsled races. Perhaps there was too much to choose from since some of the events were canceled due to lack of interest.

The "Snow Carnival" was a full week of events from 1982-1984 and was scheduled around Big Red Freakout. A semi-formal Valentine's dance replaced the Saturnalia themed dance since the event was held during the week of February 14th. Among the new events added to the schedule were the Sweetheart Slalom and Miss Snow Carnival Pageant. Stretching the carnival to a whole week was the kiss of death it seems -- the carnival fizzled and died during the mid- 1980s.

Do you have any memories of past winter carnivals to share?

Fast forward to 2009 and Winter Carnival is back at RPI with 18 (or more) events planned on the '86 Field on the last day of February.  If you haven't already heard, it's sponsored by the President and the Cabinet and supported strongly by personal donations from the President and members of the Cabinet. Will this mark the rebirth of an Institute tradition?

We had a freak warming right after our snow sculptures were all judged. I've scanned the Troy Record picture of the "early spring" in front of a badly melted sculpture with folks playing football.
How can I post it and get people to guess the year??