The 32nd Annual Big Red Freakout is being held this weekend.  Thirty-two consecutive years of the same tradition with the same purpose is relatively rare at the 'Tute, so I had to find out how the event got started and what it was like the first time around.

Big Red Freakout was the brain child of then Dean of Students Carl Westerdahl and Grand Marshal Mark Feinstein.  They thought it would be great to "get the fans psyched for one game and to pay them back for their support during the season." [The Polytechnic, Feb. 15, 1978].  Apparently RPI was known as having the best fans in the ECAC.  For the first Big Red Freakout, fans were invited to wear red, make banners for a banner contest and stay for ice skating after the game.  They were also encouraged to make lots of noise.  The visiting team (University of New Hampshire) and commentators complained about the volume of the fans during the game.  The referees threatened a penalty against the Engineers because the pep band et al were so loud.  By the way, the pep band reintroduced  Hail, Dear Old Rensselaer [click for music by the RPI Pep Band] to the Freakout crowd that night.  It's hard to believe this tune was ever unfamiliar to hockey fans!  Almost 5,000 people attended the game -- the largest crowd for a non-tournament game in the ECAC up to that date.  The RPI fans were rewarded with an exciting game -- the Engineers won in overtime 6-5. 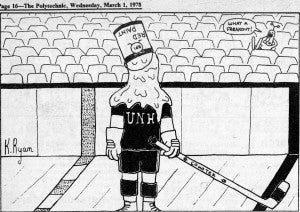 Wasn't Earl Lee '78 the person who actually chaired and coordinated the first Freakout? And weren't there cowbells or some noisemaker handed out to everyone who attended, which was part of the reason why UNH was so upset with the noise? If cowbells weren't handed out at this Freakout, then they were the favors given away somewhere in the next year or two. I remember the little copper colored cowbells with an RPI emblem on them.

Yes, Earl Lee was the coordinator and I should apologize for not giving him credit in the post! The give away for the first Freakout was engineer hats. Fans were encouraged to bring their own noisemakers, which included car horns connected to car batteries, air horns and a submarine Klaxon.

Cowbells were given out as the favor for the 3rd Freakout in 1980 during my turn as Head Freak. We brought boxes of them up to the Fieldhouse ahead of time and the echo of just a few bells was pretty amazing. The cowbells made a reappearance four years later, right before RPI won their first ECAC championship in 1984. The story goes that they were the impetus for a rule barring artificial noisemakers after everyone brought them to the Boston Garden.

I recall that Earl Lee was a fraternity brother of Mark Feinstein, which is how he ended up as the Head Freak. In the first year, I remember walking around with Earl putting up flyers about the new Freakout. We had a banner contest that night as well as handing out the engineer hats. The hockey team had gone on an incredible run at the end ofthe season, so the place was really rocking as the win clinched a home playoff berth.

My recollection of Freakout #1 was that streamer pom-poms were given out to attendees. I think the Engineer hats were sold all along at the Booster's Table. I still have mine somewhere...

I truly enjoyed reading through this write-up.Thanks.

As an attendee of three Big Red Freakout games (this one, and the two that followed), I always thought that the tradition, and its name, got started by the 1978 hit song "Freakout", which was released the same year as the first Big Red Freakout! Which by the way, we finally beat Yale at Freakout this year as a payback to two years prior.