This photo really intrigues me! In all of my RPI history travels, which includes extensive research for exhibits on student clubs and student traditions, I haven't found an explanation for this image. I hope I stumble across something someday that will help me identify this curiously dressed group of men! I'm dying to know what they were up to. Was this an early LARP club?!

I don't expect the mystery will be solved in this forum (unless you happen to have expertise in turn of the century RPI or collegiate history) —  soooo instead — I thought it would be fun to invite you to create a caption for this photograph. Any ideas?

Come on lurkers, create a pseudonym if you must and leave a comment! I'll post my caption choice after I received a few comments. :) 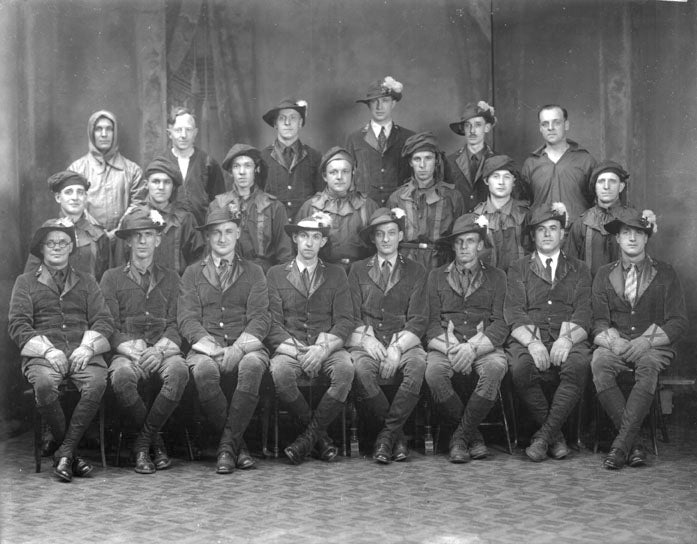 [Hint: click on the image to enlarge it for a better view]

"The group that inspired Monty Python"

This hazing thing has gone too far...

I have no ideas for a caption, but I have to say I'm really digging the knee-high spats. Where can I get some of those?

I would've said that it could be a club, such as a German club, but the fellow at the upper left corner is dressed differently enough that it seems more like the cast of a play.

Here's a suggested caption: "Robin Hood and the RPI Players Men near the Pinewood Forest."

(I mixed together Pinewood Cemetery/Forest Park.)

"Theater at Rensselaer has a long history — the best record we have is dated November 25, 1929 and states: “The first regular meeting of the R.P.I. Dramatic Club was held Tuesday, Nov. 25, 1929 in the Proudfit Building.” And thus a club was born.

The meeting minutes dated March 12, 1930 also contain a significant turning point in the club’s history: “The question of a name for the club was brought up and a motion was passed to call it hereafter The R.P.I. Players.”
"

If the earliest Players' meeting minutes survived, it seems likely that there would be a surviving photo too. Does the photo strike you, as it does me, as possibly being from between 1930 and just maybe up to the 1950's?

Is it possible that a blown-up version of the photo could be displayed at the next few class reunions from the 1930's and 1940's in the hopes that someone there will recognize themselves or a fellow classmate?

Thanks for an entertaining dip into RPI history!

Thanks for your comments Crystal. It never occurred to me that this photo could be the cast of a play. Sounds logical, though. We have the archives of the RPI Players which contains a series of photographs. https://www.rpi.edu/dept/library/html/Archives/access/inventories/pdf%2…

I'll have to make this a research project for a student assistant. Perhaps we could have a real caption for this photograph!

At first glance, I thought the outfits looked so Bavarian that these guys were the beer servers for the Oktoberfest. But then I looked at the gloves, which are reminiscent of ice hockey gloves with the wrist protection. And then the cross pattern on each glove made me think of the gloves the US Army Cavalry would wear while riding horses, and then, don't those high-topped boots look like riding boots?

However, the hats with those cockeyed feathers are definitely still Bavarian.

So maybe some kind of equestrian club?

Oh, as for a caption, how about: