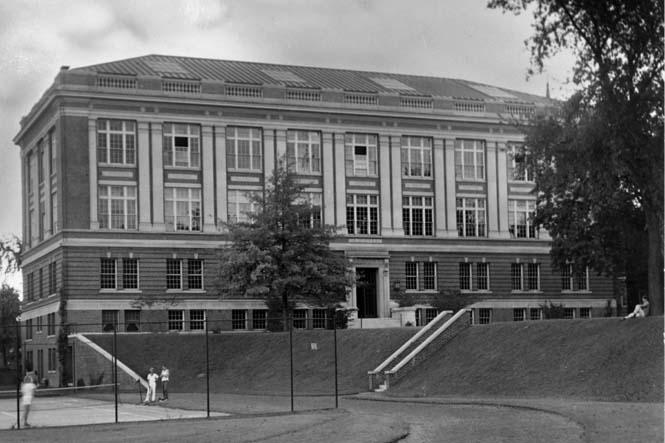 The establishment of the School of Architecture in 1929 necessitated a building for that purpose. The five-story structure was built with money accumulated in the Bankers Trust Fund. Joseph Lawlor was once again hired as architect, but this time, Ralph Gulley, the new head of architecture, provided consultation on design. The building was completed in 1931 at a cost of $400,000. It was named in memory of Benjamin Franklin Greene, Director of Rensselaer, 1847 -1859. The names of fifteen of the most renowned deceased American architects were cut in stone above the second-story windows: Bulfinch, Burnham, Goodhue, Hooker, Hunt, Jefferson, Latrobe, McComb, McIntyre, McKim, Mills, Renwick, Richardson, Sullivan, and Upjohn. The three upper stories were devoted to the architectural department, including an architecture library. The first two stories were used for general recitation purposes and provided temporary quarters for the English department and ROTC. Today the building is entirely occupied by the School of Architecture.