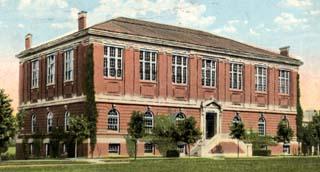 Once the campus was established on the hill, students began to complain about the location and inadequacy of the old gymnasium. The Alumni Association led a movement to raise money to build a new building near the athletic field. The Class of 1887 took up the cause and presented $150,000 to the Institute in 1911 to build and equip a new gymnasium. The building was designed by Lawlor & Haase of New York and built of Harvard brick and Indiana limestone. The Class of 1887 formally presented the building to the Board of Trustees on Alumni Day, June 11, 1912.

A swimming pool 75 feet by 30 feel is situated in the basement, which is eighteen feet in height. There is a gallery around it. The basement also contains four bowling alleys with a mezzanine floor above on which are shower baths and 800 lockers. Filters for the pool and a wash room are also in the basement. The first floor contains rooms for baseball practice, basketball and fencing, a squash court and the offices of the Professor of Physical Training. Above this floor is a room 125 feet by 64 feet in size with a height of 23 feet to the trusses and 36 feet to the peak of the roof. It is used for general gymnastic practice. A running track encircles this room in a gallery ten feet above the floor. The building is completely equipped with the best forms of gymnastic apparatus.In consequence of the construction of this gymnasium, the Board of Trustees has inaugurated compulsory athletic exercise for members of the freshman class, and the existence of the pool has enabled a rule to be adopted requiring that each member of this class must know how to swim. 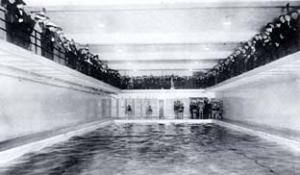