To the Rev.d D.r Blatchford Lansingburgh
Dear Sir:
I have established a school at the north end of Troy, in Rensselaer county, in the building usually called the Old Bank Place, for the purpose of instructing persons, who may choose to apply themselves, in the application of science to the common purposes of life. My principal object is, to qualify teachers for instructing the sons and daughters of farmers and mechanics by lectures or otherwise, in the application of experimental chemistry, philosophy, and natural history, to agriculture, domestic economy, the arts, and manufactures. From the trials which have been made by persons in my employment at Utica, Whitesborough, Rome, Auburn, & Geneva during the last summer, I am inclined to believe that competent instructors may be produced in the school at Troy who will be highly useful to the community in the diffusion of a very useful kind of, knowledge, with its application to the business of living. Apparatus for the necessary experiments has been so much simplified, and specimens in natural history have become subjects of such easy attainment, that but a small sum is now required as an out fit for an instructor in the proposed branches of science. Consequently any school district may have the benefit of such a course of instruction about once in two or three years, as soon as we can furnish a sufficient number of teachers. I prefer this plan to the endowment of a single public institution for the resort of those only whose parents are able and willing to send their children from home or to enter them for several years upon the Fellenberg plan. It seems to comport better with the habits of our citizens and the genius of our government to place the advantages of useful improvement equally within the reach of all. Whether my expectations will ever be realized or not, I am willing to hazard the necessary expense of making the trial. Having procured a suitable building advantageously located among farmers and mechanics, and having furnished funds which are deemed sufficient by my agents in this undertaking for procuring the necessary apparatus etc. it now remains to establish a system of organization adapted to the object. You will excuse me if I attach too much consequence to the undertaking. But it appears to me that a board of trustees to decide upon the manner of granting certificates of qualfications, to regulate the government of students etc. is essential. I therefore take the liberty to appoint you a member and president of a board of trustees for this purpose.

I appoint the following gentlemen trustees of the same board. The Rev.d D.r Blatchford, Mr. E. Parmalee, of Lansingburgh, Guert Van Schoonhoven, John Cramer of Waterford Simeon DeWitt, T. R. Beck of Albany, John D. Dickinson and Jedediah Tracy of Troy. And I appoint 0. L. Holley Esq. of Troy, T. R. Beck, of Albany first and second vice-presidents of said board.
As a few regulations are immediately necessary, in order to present the school to the public, it seems necessary that I should make the following orders, subject to be altered by the trustees, after the end of the first term.

Order 1.st The board of trustees is to meet at times and places to be notified by the president, or by one of the vice-presidents in the absence or disability of the president. One half of the members of the board are to form a quorum for doing business. A majority of the members present may fill any vacancy which happens in the board; so that there may be two members resident in Troy, two in Lansingburgh, two in Waterford, and two in Albany. The powers and duties of the trustees to be such as those exercised by all similar boards, the object of the school being always kept in view.

Order 3.rd I appoint Amos Eaton of Troy professor of chemistry and experimental philosophy, and lecturer on geology, land surveying, & the laws regulating town officers and jurors. This office to be denominated the senior professorship.

Order 4.th I appoint Lewis C. Beck, of Albany, professor of mineralogy, botany and zoology and lecturer on the social duties peculiar to farmers and mechanics. This office to be denominated the junior professorship.

Order 5.th The first term is to commence on the first Monday in January next,
and to continue fifteen weeks. For admission to the course, including the use of the library and reading-room, each student must pay twenty-five dollars to the treasurer, or give him satisfactory assurances that it will be paid in one year. In addition to this, each section of students must pay for the chemical substances they consume and the damage they do to apparatus.

Order 6.th All the pay thus received by the treasurer, as for parts of courses of instruction, is to be paid over to said professors as the reward of their services.

Order 7.th In giving the course on chemistry, the students are to be divided into sections
not exceeding five in each section. These are not to be taught by seeing experiments and hearing lectures, according to the usual method. But they are to lecture and experiment by turns, under the immediate direction of a professor or a competent assistant. Thus by a term of labor, like apprentices to a trade, they are to become operative chemists.

Order 8.th At the close of the term each student is to give sufficient tests of his skill and science before examiners, to be appointed by myself, or by the trustees, if I do not appoint. The examination is not to be conducted by question and answer, but the qualifications of students are to be estimatedby the facility with which they perform experiments and give the rationale; and certificates or diplomas are to be awarded accordingly.

Order 9.th One librarian, or more, to be appointed by the professors, will be keeper of the reading-room. All who attend at the reading room are to respect and obey the orders of the librarian in regard to the library and conduct while in the room.

Order 10.th Any student who shall be guilty of disorderly or ungentlemanly conduct is to be tried and punished by the president or vice president & two trustees. The punishment may extend to expulsion and forfeiture of the school privileges, without a release from the payment of fees. But a student may appeal from such decision to the board of trustees. This instrument, or a copy of it, is to be read to each student before he becomes a member of the school; and be is to be made to understand that his matriculation is to be considered as an assent to these regulations. 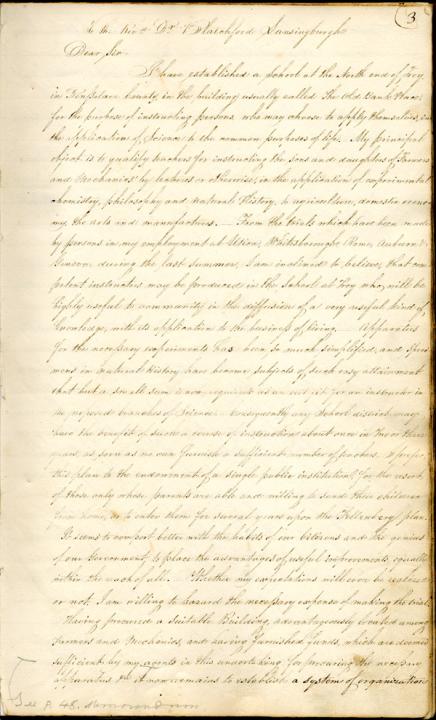 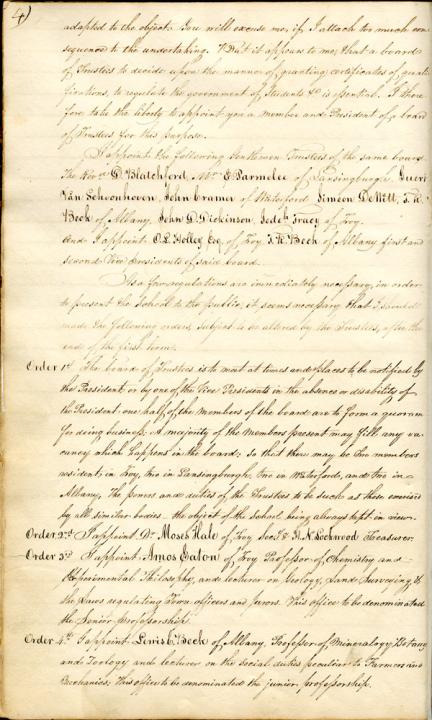 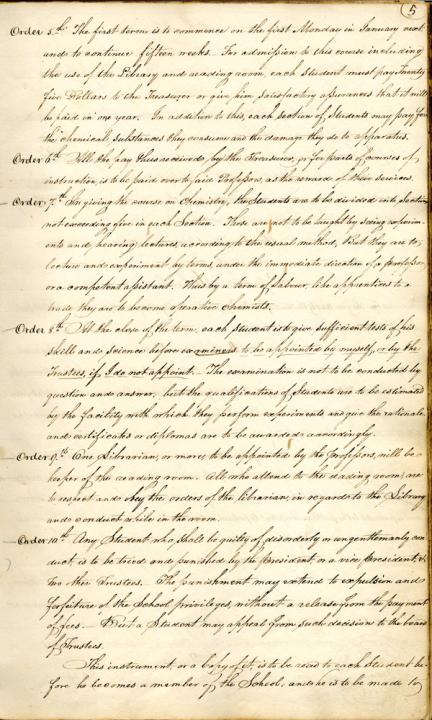 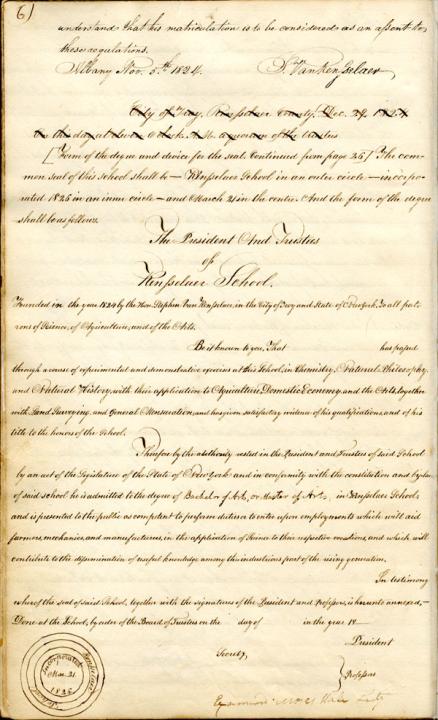